It’s possible you’ve heard of autism or ADHD. They’re often talked about, but conversations revolving around them can range from slightly information to “joking” and casual. ADHD is usually the punchline to many people’s joke or used to describe a quirk. Autism appears often in medical TV shows as a scary, life-changing disorder in children or is passed around feverishly between different news outlet. But what are they?

Autism describes a wide range of developmental disorders and make up the autism spectrum. Some are born with it, or it can manifest in early childhood. Someone with matching conditions falls into the spectrum and can be diagnosed with ASD or Autism Spectrum Disorder.

Autism affects the brain and makes interacting with others more difficult. Early signs of ASD can show in the form of having difficulty speaking or understanding language at an early age. Those on the autism spectrum might function differently. Some will have mild conditions and others will have more severe, debilitating difficulties.

Typically autism is recognized in the early stages of life, so this is usually in the first two to four years of life. It is unknown currently as to what causes autism, and diagnosing it can require the help of numerous health specialists. Getting treatment and assistance early on can make life easier for those with ASD. Unfortunately, it isn’t curable, but it is treatable. Autism affects children and adults differently, especially considering the changes in social and personal responsibilities.

ADHD means ‘attention deficit hyperactivity disorder’, and it’s so much more than a joking matter. It’s a common disorder that starts and childhood and can persist through to adulthood. Many people go without treatment as they aren’t able to acknowledge their own symptoms. ADHD has three different subtypes: predominantly hyperactive-impulsive, predominantly inattentive, and combined hyperactive-impulsive and inattentive. To understand these you need to break down each element of the subtypes: hyperactivity, impulsiveness, and inattentiveness.

Those with a hyperactivity disorder will have a few symptoms. A few examples can be excessive chatting, fidgeting when seated, running around and touching anything and everything in reach, and having difficulty doing tasks quietly. Since ADHD happens commonly during childhood, many will just take this as a symptom of being a child, it’s important to recognize when there is an excess of energy.

Symptoms of impulsiveness can be heightened irritation or impatience, interrupting conversations or activity, acting without restraint, or expressing emotions inappropriately.

Finally, there are a number of symptoms for inattentiveness, but a few of them are not seeming to listen when spoken to, struggling to follow instructions, quickly losing interest in a task unless enjoying self, and difficulty processing information as quickly and accurately as others.

What Not to Overlook

While ADHD does mean that one cannot focus on a single activity or that one quickly switches between different activities, it has more complicated factors that can be overlooked. ADHD can be classified as a learning inhibitor as well as a behavioral disorder. Things such as blurting out inappropriate comments can be seen as a rude child or improve upbringing, but as a parent, it’s important to recognize these signs and traits in excess.

Those with ADHD or autism can develop self-esteem issues, problems at school or work, and difficult relationships. They’re both chronic disorders that can last for years or be lifelong.

So, this is just the foundation of understanding. Doing more research and encouraging conversation to help yourself and others opens up other doors of knowledge.

Please let me know if you have any questions. I’d love to help you! 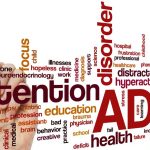